During a whole day several speakers spoke about NHibernate and related topics. This conference was in Bologna and was very well prepared and organized.

You could watch the slides and the videos of the sessions here. I joined the following sessions:

Simone Chiaretta opened the conference and showed during his keynote how the day is organized. But he couldn’t resist to make a little joke about us Swiss folk which isn’t part of the European union, so basically we shouldn’t be here ;-).

On the next graphic you see a summary about the attendees. 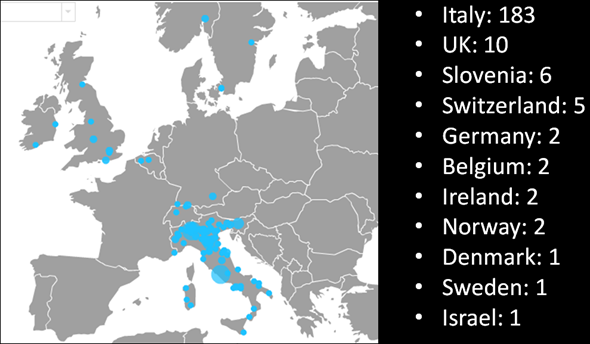 Actually there were around 150 attendees, two rooms with parallel sessions. In the main room mainly Ayende hold his sessions. 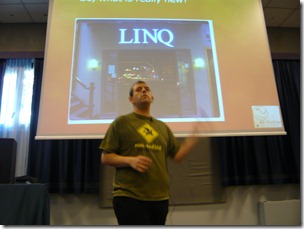 Oren Eini, aka Ayende,  showed in this session what’s new in NHibernate 3.0. For me there wasn’t a lot new, also because I hold two presentation at the .Net User group Bern about NHibernate in august.

After the presentation I asked Ayende if the lazy properties aren’t in NHibernate 3.0. But Ayende just forgot to mention them so he did it in his next session. 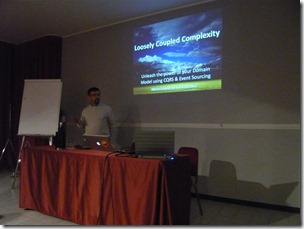 This session by Alberto Brandolini was very interesting and entertaining. The topic was about CQRS. It is currently a hot topic, so I took the chance to learn a bit more about it. There was a lot of content but the presentation run a bit out of time.

Alberto asked during his presentation a lot of interesting questions and showed by very nice slides (only the beamer had sometimes problems with the colors) how to transform a classical layered architecture to a CQRS architecture. The following two graphics show the transformation. On the left you see the traditional architecture and on the left the CQRS architecture: 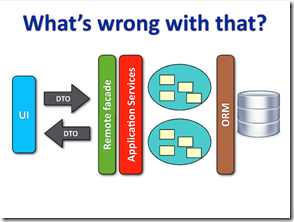 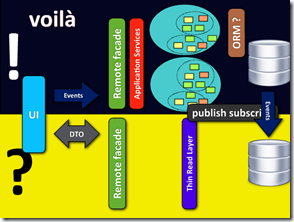 Here my most favored slide of this session: 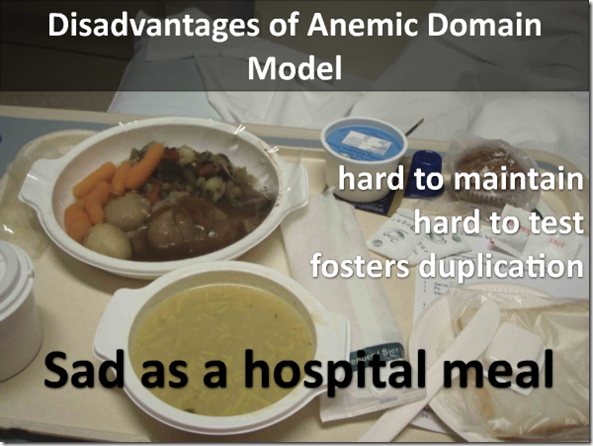 As usual, CQRS isn’t a silver bullet. You have to ask yourself if it makes sense to do all queries through an object relational mapper and not directly to the database. That doesn’t mean to go back to ASP or PHP, but just use the tools for the purpose for which they made for. 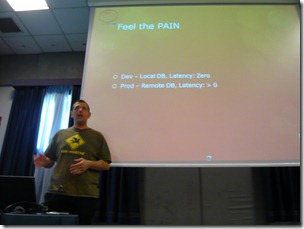 This session was also held by Ayende. He showed some concepts in NHibernate by showing some code. 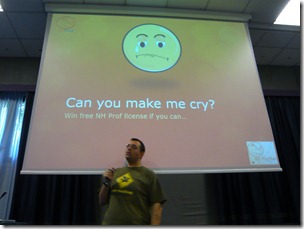 This was a very interesting session with Ayende. He discussed the worst practices with NHibernate.

After Ayende finished his presentation he asked the attendees what they did bad things with NHibernate or what kind of worst practices they observed.

In this session Fabio Maulo joined us through Skype from Argentina (unfortunately audio only). It was funny, because Ayende mentioned after the session, that it was the first time that Ayende and Fabio talked together about NHibernate: 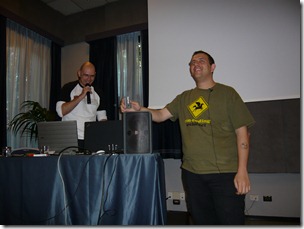 During this session the attendees could ask question to Fabio or to Ayende and they tried to answer them. Fabio speaks much better Italian or Spanish, so most of the English questions was answered by Ayende.

But Fabio mentioned the following several times: “Welcome to NHibernate, welcome to the world of options!”

One last thing: At the beginning of this session Ayende and Fabio announced the fist beta of NHibernate 3.0. 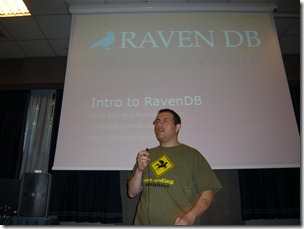 Ayende presented the current version of RavenDB. It was very interesting to see a NoSQL Database in Action. One more item for my to-do-list. With RavenDB there is no longer a need for an object relational mapper because the data could be stored directly into the database.

At the dinner after the conference I asked Ayende if RavenDB is also designed to be shared. He answered with no, as I expected. If it would be shared, then you probably need at the end a framework to map your model to the model of the database. And something funny: Maybe you would also need someday a person like a document database admin (DDA).

The location of the conference Bologna was for me well reachable. I was surprised from how many countries in Europe people came to this event. I  wasn’t the only geek from Switzerland, also Kay Herzam, was present at the event. 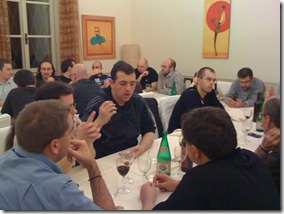 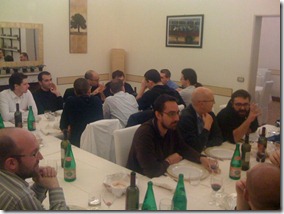 For me the networking was very important. So I had also dinner at Friday with the a group of attendees, organizers and speakers. Also during Saturday (lunch and dinner) I had the possibility to discuss with Ayende or Rob Ashton. I had a lot of fun and could make a lot of contacts to Italian software engineers.

And one final note: The food in Bologna was exceptional (as expected) and Bologna has also a very nice old city.

4 thoughts on “NHibernate day in Bologna”